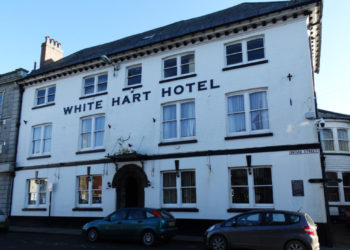 The White Hart Hotel, in Launceston, Cornwall, has been sold for an undisclosed sum, after previous owners were forced to close the building in 2019 following a fire in the roof annex.

The GradeII venue which was originally built in the 17th Century features 20 en-suite rooms and a manager’s flat. It is arranged over three storeys, with the ground floor including a bar, dining area, snooker room, conservatory, function rooms and a large ballroom.

Prior to its 2019 closure, the business traded as a successful coaching inn, with strong performing multi-income streams including weddings and events popular with the local community.

The hotel has been purchased by Lisa and Mike Howard and their family, who are currently expanding their hospitality portfolio within the area. They have also just recently purchased the Racehorse Inn located in North Hill just outside of Launceston.

Lisa Howard said it is her family’s intention to “restore the hotel to its former glory” and “bring it back” to the heart of Launceston.

She added: “We have big plans for the hotel which include moving the bar, a new coffee lounge and improvements throughout the building.

“We have not yet set a date for reopening but hope to be in a position to do a partial opening by Christmas.”